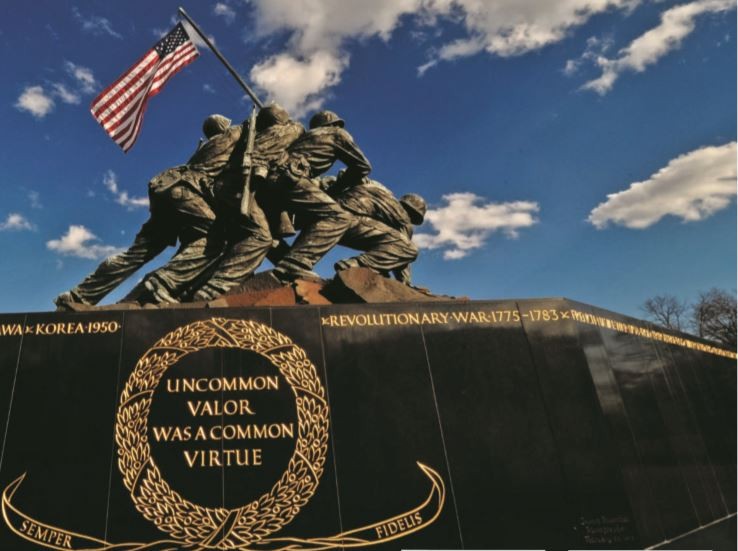 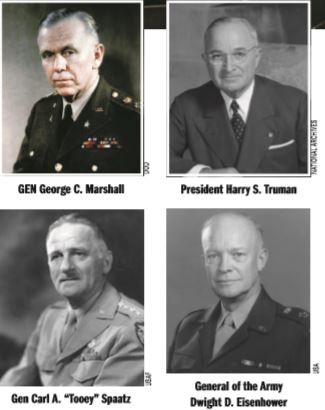 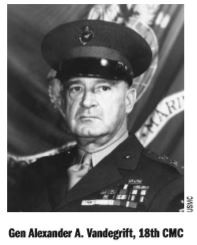 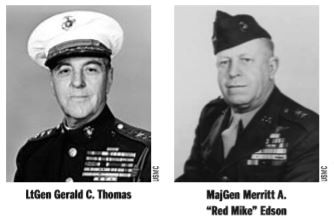 The American blood that was spilled on the World War II battlefields of Europe and the Pacifc had not yet dried when plots were hatched in the halls of the nation’s Capitol to bring the Marine Corps into tow and gut its combat capabilities. Enter a deceptively inauspicious band of Marine offcers willing to risk everything for their Corps.

“The raising of that fag on Suribachi means a Marine Corps for the next 500 years,” said Secretary of the Navy James V. Forrestal to Lieutenant General Holland M. “Howlin’ Mad” Smith, in the command ship USS Mount Olympus (AGC-8) off the island of Iwo Jima the morning of Feb. 23, 1945. The grandfatherly looking Smith, a tenacious battlefeld commander, was not such a romanticist, and when Forrestal was out of hearing range, said, “When the war is over and money is short, they will be after the Marines again, and a dozen Iwo Jimas would make no difference.”

When the Japanese signed surrender documents aboard USS Missouri (BB-63) in Tokyo Bay, Sept. 2, 1945, the Marine Corps and its sister services faced a massive task of downsizing their numbers and reorganizing.

“To demobilize a Corps of [500,000] offcers and men and ‘get the boys home’ under pressure of a wave of home-town hysteria that temporarily crippled our foreign policy and is embarrassing to remember,” writes historian Colonel Robert Debs Heinl Jr., in “Soldiers of the Sea: The United States Marine Corps, 1775-1962,” Congress authorized 107,000 offcers and men as the peacetime strength of the Corps in order “to confront ill-defned but disturbing pressures for extensive reorganization of the defense establishment, which boded nothing but trouble for the Marine Corps.”

Heinl asserts that the authorization also was “to respond professionally to the chorus of doubts and unanswered questions inspired by the advent of the atom bomb, especially prophecies that ‘there would never be another amphibious landing.’ ” The latter was a swipe at the Corps by Army General Omar N. Bradley. The efforts to reduce the Marine Corps started as far back as 1943 while the country was at war. In November of that year, GEN George C. Marshall, Army Chief of Staff, signed off on a memorandum that proposed the Air Corps be separated from the Army and that the Armed Services be unifed under the Department of War, with a single chief of staff and an Armed Forces general staff.

While the Collins plan was being debated on Capitol Hill, a debate with far more direct bearing on the Corps was taking shape, according to Heinl. Initially, GEN Marshall; the Commanding General, Army Air Forces, Gen Carl A. “Tooey” Spaatz; and Army Chief of Staff GEN Dwight D. Eisenhower “saw the overweening ambition inherent to their plan,” writes Robert Coram in “Brute: The Life of Victor Krulak, U.S. Marine,” “because when they codifed their ideas into a series of papers known as the JCS 1478 papers, the papers, in arbitrary and unnecessary classifcation, were stamped ‘TOP SECRET,’ ” and closely held.

When Krulak saw the plan, he said it “would isolate the president, as commander in chief, from broad military advice. A single secretary would counsel the president supplanting both the civilian secretaries of the military departments and chiefs of the services. The new defense secretary would have the responsibility of formulating a single military budget, which the service chiefs would be called upon to defend, but which they would not have had a hand in creating.” Navy Secretary Forrestal believed the plan was “fundamentally against the spirit and genius of American institutions.” Naval offcers gasped in the realization that it “meant the end of the naval establishment and all it had stood for.”

Gen Spaatz and GEN Eisenhower outlined the War Department’s plan for the Corps. The Marines would fight “only in minor shore combat operations in which the Navy alone is interested.” Their size would be limited to “lightly armed units, no larger than a regiment, to protect U.S. interests ashore in foreign countries, and to prov ide interior guard of naval ships and shore establishments.” The total strength of the Corps would be limited to 60,000 with no expan sion in time of war; the Marine Corps Reserve would be abolished. Marine units would be held below the size requiring the combining of arms.

Marine aviation would be merged into what might be left of naval aviation or be transferred outright to the Air Force. Mar ines were to be restricted to the “water borne aspects of amphibious operations” (duty as landing craft crews and beach labor parties).

Admiral Chester W. Nimitz, Chief of Naval Operations, read the proposal, fumed and said it was no more than an effort “to eliminate the Marine Corps as an effective combat force.”

The 18th Commandant of the Marine Corps, Gen Alexander A. Vandegrift, wrote to retired LtGen Thomas Holcomb (the 17th CMC), “The Army is back on the job in full force trying to absorb the Navy and with it the Marine Corps.” The War Department was unfazed. According to Heinl: “A Senate bill (S.2044) was introduced … that included authority that would permit the new Sec retary of Defense to prescribe by fat, with out congressional check, the roles and missions of the Armed Services. This would remove the Marine Corps from the protection of Congress where it had stood since 1798 and would enable accomplishment of the War Department program by the stroke of a staff offcer’s pen.”

Sensing victory, the rhetoric got nasty. Army BG Frank Arm strong, a spokesman for the War Department, said during a speech, “As for the Marines, you know what Marines are. They are a small, fouled-up Army talking Navy lingo. We are going to put those Marines in the regular Army and make effcient soldiers out of them.”

Enter the Little Men’s Chowder & Marching Society. The Chowder Society was a group of offcers under LtGen Merrill B. Twining who were the intellectual impetus behind the Corps’ efforts to remain a separate service.

It got its name from a popular comic of the day, “Barnaby.” The title character was short and bore a resemblance to thenCol “Brute” Krulak, one of the principals in the Twining effort. Barnaby had a fairy godfather named Jackeen O’Malley, and he belonged to a club called the “Elves, Leprechauns, Gnomes and Little Men’s Chowder & Marching Society.” Col James D. Kerr hung a copy of the cartoon on Krulak’s offce in Quantico, Va., with Little Men’s Chowder & Marching Society underlined and Barnaby labeled “Krulak.” In later years, Twining would write to Marine Corps historian Benis M. Frank, “I knew … that a government offcial appointed by the President must act in accordance with the precepts emanating from the White House. Any organized opposition to its dictates is in effect conspiratorial except, and then only arguably, when he is responding to questioning by the legislative branch.

“The Chowder Society con ducted its operation with that thought uppermost in order to prot ect General Vandegrift, from a single moment of sorrow emanat ing from our efforts. We de liberate ly, and at my insistence, operated on a totally collegial basis. In other words, we operated without formal organization.”

The Navy, however, organized and was, according to Twining, “soon inv olved in scandal and detection. They destroyed themselves. We were also constantly under scrutiny, but our method of operation enabled us to avoid detection in ‘fagrante delicto [being caught in the act].’ ”

BGen Gerald C. Thomas, another veteran of Guadalcanal, was also a highly decorated and experienced combat veteran of WW I, Haiti and China. He was smart enough to have taught intelligence and history at Marine Corps Schools Quantico, and, according to Krulak, had “solid grounding in the origins of the Corps.” He “could see through a problem with lightning speed.” He was a man “whose solutions were practical and strong, and whose ability to express himself in clear and persuasive terms was legend.” When briefed on the Army’s unifcation plan, he described it to Krulak as “pure militarism in the German image and a direct threat to the Corps.”

Others in the group included BGen Merritt A. “Red Mike” Edson, leader of Edson’s Raiders and recipient of the Medal of Honor on Guadalcanal; Colonels Robert E. Hogaboom and James E. Kerr; Lieutenant Colonel James C. Murray, who, according to Krulak, “had an innovative brain, an agile pen, and a great capacity for work”; and LtCol James D. Hittle, “an articulate writer and a tireless lobby ist whose Capitol Hill contacts were critical.” Others were Lieutenant Colonels DeWolf Schatzel, Samuel R. Shaw, Robert D. Heinl and Edward H. Hurst, Major Jonas M. Platt and reserve offcers Russell Blandford (who later retired as a major general), Arthur Hansen and William McCahill.