Robert Coram, in “Brute,” singled out one particular member of the Chowder Society—LtCol Lyford Hutchins, USMCR, a veteran of WW II, and later, Korea and Vietnam. Coram des cribed him as “a shadowy fgure who sometimes disappeared for days on end. When he reappeared, he would empty a briefcase onto Krulak’s desk, and out would tumble documents so sensitive that Krulak would wonder whether they had been purloined. It was Hutchins who obtained a copy of the JCS 1478 papers that gave Krulak the blueprint for Army unifcation.”

The Chowder Society was anything but a team. Krulak said, “There were times when we were more like a log foating down stream with a thousand ants on it—each of them convinced that he was steering. At best, we were a group of in dividuals who had a reasonable understanding of the problem and shared similar goals.”

Caution was the order of the day. “There was no reason to treat [the 1478 document] with that high degree of sensitivity but, so long as it was thus classifed, we would be unable to use the 1478 papers to show what the other services were planning for the Marines’ future,” according to Krulak. Nonetheless, they had decided to confront the Army head on. Krulak said the unifcation debate was in reality a “cat fght where the stakes are the preservation of the existing U.S. military structure as well as the survival of the Marine Corps as a national institution.” Gen Vandegrift had been called to testify before the Senate Naval Affairs Committee. Twining and Krulak had worked up a response that Twining insisted be tough and truthful. It would be “clear and unequivocal” and would focus on Army motivation.

The Commandant gained everyone’s full attention by saying the unifcation bill was fundamentally fawed, and the Army was deliberately seeking to usurp congressional authority. He then added: “This bill gives the War Department a free hand in accomplishing its expressed desire to reduce the Marine Corps to a position of military insignifcance.”

He emphasized a crucial point that placed a burden on Congress. “In its capacity as a balance wheel, the Cong ress has on fve occasions since 1928 refected the voice of the people in casting aside a motion that would damage or destroy the Marine Corps. Now I believe the cycle has repeated itself and that the fate of the Marine Corps lies solely with the Congress. “The Marine Corps thus believes it has earned this right—to have its future decided by the legislative body which created it—nothing more. … The bended knee is not a tradition of our Corps. If the Marine as a fghting man has not made a case for himself after 170 years, he must go. But I think you will agree with me that he has earned the right to depart with dignity and honor, not by subjugation to the status of uselessness and servility planned for him by the War Department.” The secrecy cover was lifted off the Army’s plan, and the Army was ridiculed by the media. President Truman was furious, accord ing to Coram, but publicly held his tongue. Leaders of the Senate and the House said the Army bill would not pass if it meant stripping the Marine Corps of its historic functions. Privately, however, the president gave the Commandant “a brutal tonguelashing.”

Accompanied by BGen Thomas and BGen Edson and Secretary of the Navy Forrestal, Gen Vandegrift, according to J. Robert Moskin, author of “The U.S. Marine Corps Story,” went to see Pres ident Truman and “argued for a Con gres sion al charter for the Corps. [GEN] Eisen hower, now the Army’s Chief of Staff, opposed having ‘two land armies’ and reco mm ended that the Marines be limited to units of regimental size. He told [Gen] Vandegrift that the Army dreaded the Corps’ expan siveness ever since the publicity over Belleau Wood [in WW I].”

Vandegrift assured Eisenhower that the Corps had no ambition to be a second army and wanted to remain an amphibious partner with the Navy.

The battle, however, continued, but according to Twining, “The public began losing interest in our cause.” Members of the Chowder Society marched into Congress “without any idea of what they were supposed to accomplish,” but they talked the Corps’ case to whoever would listen. Twining said, “Within 72 hours, President Truman was on the phone to Vandegrift—‘Get those lieutenant colonels of yours off the hill.’ ”

For a long time, there was little doubt among military handi cappers that BGen Edson, with his war record and record of service to the Corps, eventually would become Commandant of the Marine Corps. However, when he was ordered not to oppose unifcation in public, Edson retired to rouse support for the Marine position.

In an article titled “Power­Hungry Men in Uniform,” he wrote that he disliked “an American replica of the Prussian general staff system.” Immediately after his retirement, he said, “I am a military man and proud of it, but when we reach the point where the military are directing, rather than supporting our country’s policies, we are far along the road to losing what this country has always stood for. It was because of this trend of events that I finally reached the very difficult decision to resign.”

Twining later wrote, “Edson sacrifced himself by openly challenging the Army attempt. A selfess act but regrettable … and we lost our greatest hope for the future.”

In “Semper Fidelis: The History of the United States Marine Corps,” author Allan R. Millett writes, “The 1949 hearings and press coverage of the interservice rivalry over roles and missions, however, stirred Corps champions in Congress, particularly Carl Vinson, the powerful chairman of the House Armed Services Committee. … Vinson introduced legislation to curb the [Joint Chiefs of Staff] powers over roles and missions and to put the Commandant on the JCS. Similar proposals would also have set the Corps’ strength at 6 percent of America’s uniformed manpower and created an assistant secretary of the Navy to represent the Corps.

Despite the opposition of the second Secretary of Defense, Louis A. Johnson, the Commandant sought a place on the Joint Chiefs of Staff for disc ussion of matters affecting the Marine Corps. Secretary Johnson “had little love for the Navy and none for the Marine Corps. Unopposed by a complaisant Secretary of the Navy [John L. Sullivan], he directed sharp cuts in Fleet Marine Force strength for fscal years 1949 and 1950,” according to BGen Edwin H. Simmons, USMC (Ret) in his book, “The United States Marines, 1775-1975.”

“In a public relations gaffe of the frst magnitude,” according to Millett, “President Truman himself handed Corps champions a new opportunity.” In response to a letter from Representative Gordon L. McDonough about legislation that would entitle the Corps to be fully recognized as a major branch of the Armed Forces, he wrote on Aug. 29, 1950: “The Marine Corps is the Navy’s police force, and as long as I am president, that is what it will remain. They have a propaganda machine that is almost equal to Stalin’s.”

The media also received the letter, and the public’s response did not support the president’s position. Postal sacks stuffed with hostile letters made their way to the White House and what stung most were the unsolicited rebukes from citizenry, most of them from the Marine Corps family.

Less than a week later, the president apologized to the CMC. “I sincerely regret the unfortunate choice of language, which I used in my letter of Aug. 29 to Congressman McDonough concerning the Marine Corps,” wrote President Truman in a Sept. 6, 1950, letter to Gen Clifton B. Cates. For all intents and purposes, the Corps’ fght for survival ended on July 26, 1947, when President Truman signed the National Security Act organizing the military under a single secretary of defense and establishing the Air Force as a separate arm. The Act was especially important to the Corps, according to Moskin, as it “formalized in law for the frst time the Corps’ special amphibious function. The Corps was assigned the mission of seizing and defending advanced bases and engaging in land operations related to a naval campaign.” The Fleet Marine Force was retained and the Commandant also had a seat on the Joint Staff. “The Corps did, in fact, remain virtually a ‘second army’ with a manpower ceiling of 400,000.”

Coram writes: “On the evening that the National Security Act was passed, members of the Chowder Society met as a group for the frst time. The meeting was at Krulak’s house where the offcers celebrated the fact that America and their Corps had prevailed in a great battle. … Almost everyone drank too much as they replayed various skirmishes of the long battle. Then the Chowder Society was dissolved.”

According to Krulak, President Truman, in his conversation with Gen Vandegrift had asked quizzically, “You Marines don’t trust anybody, do you?” Krulak noted, “The President was right.” And he warned future generations of Marines, “I believe the triumph [in the 1947 National Security Act] was due to, more than anything else, the quality of apprehensive vigilance that has characterized the Corps since its birth.” 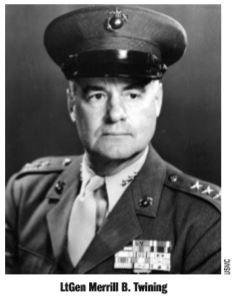 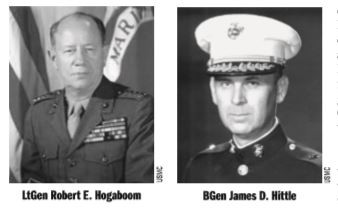 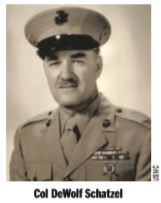