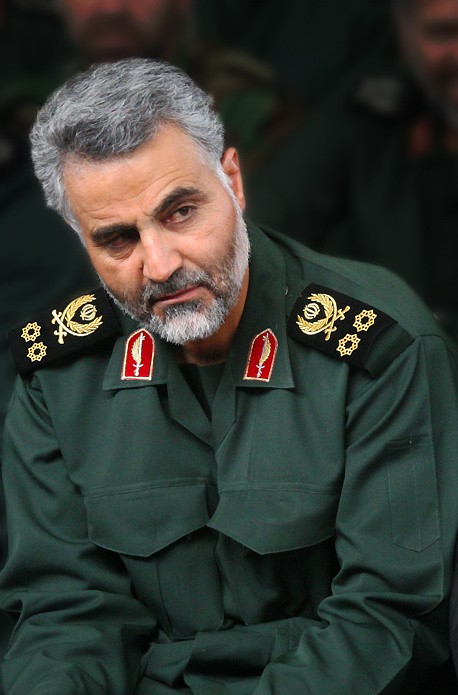 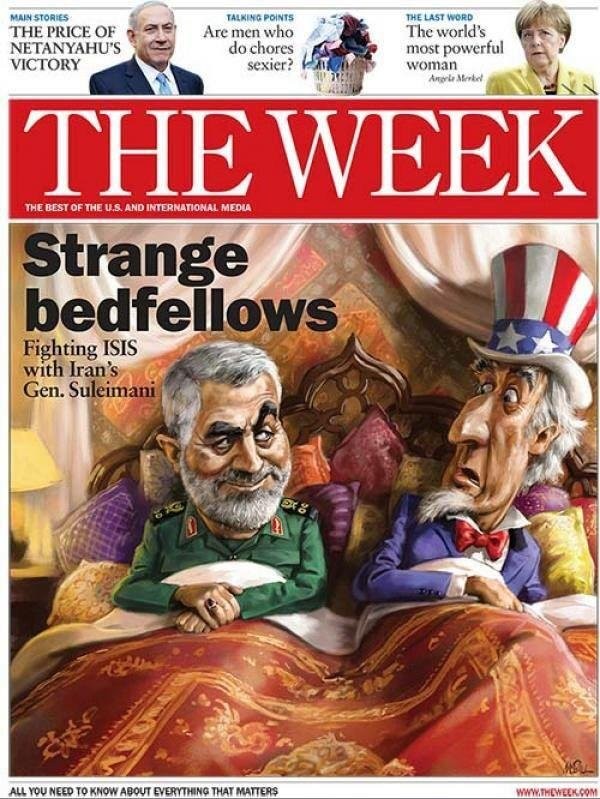 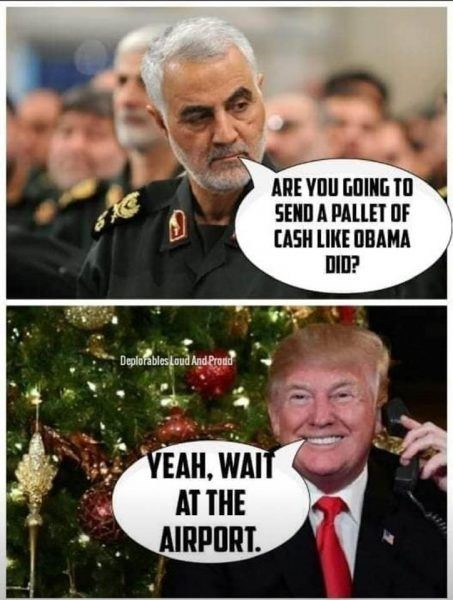 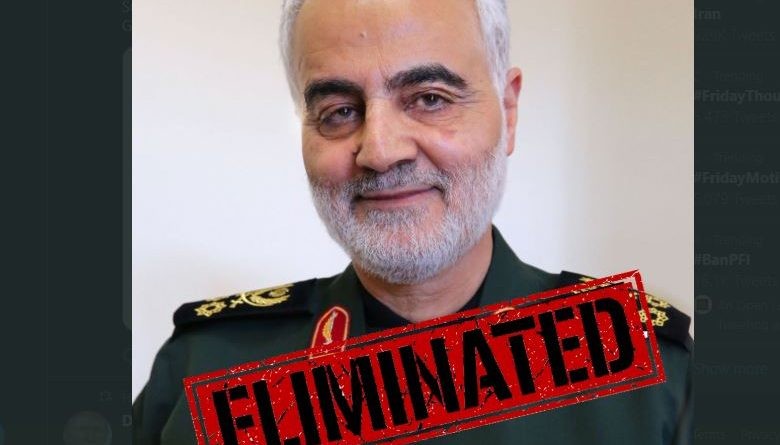 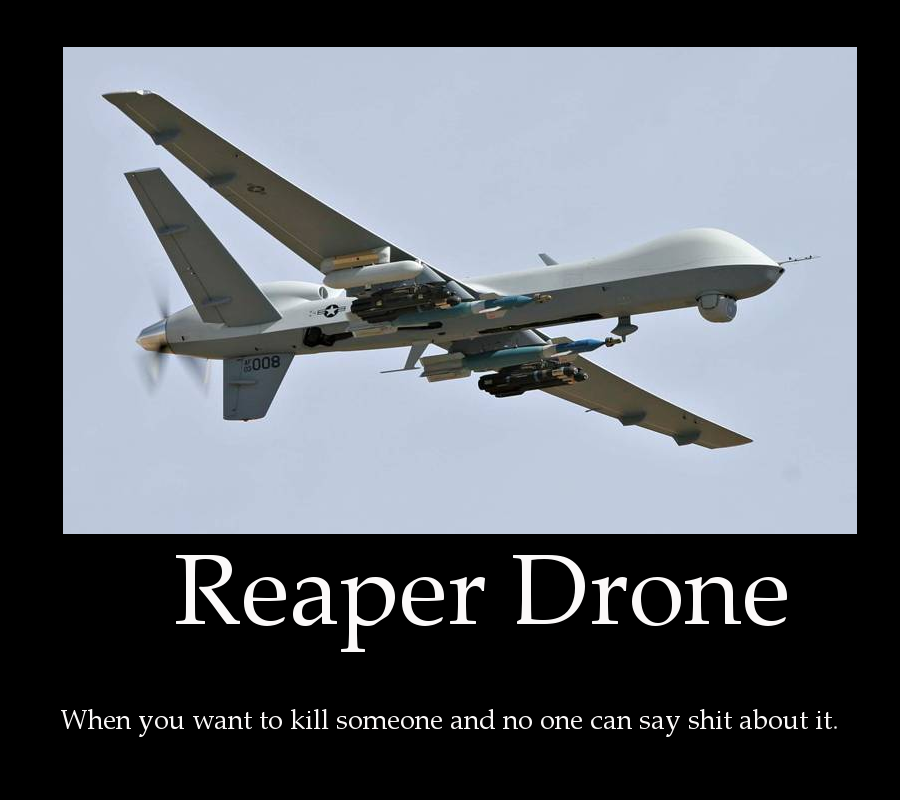 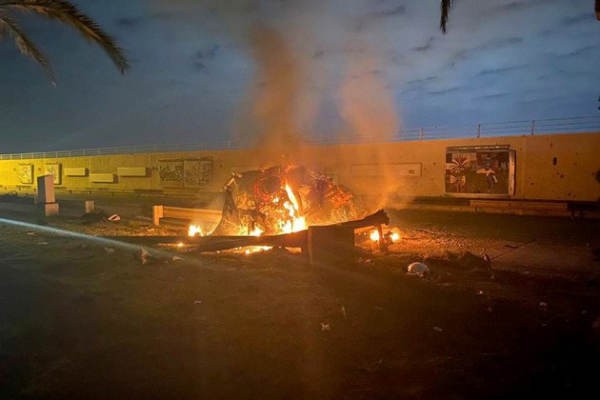 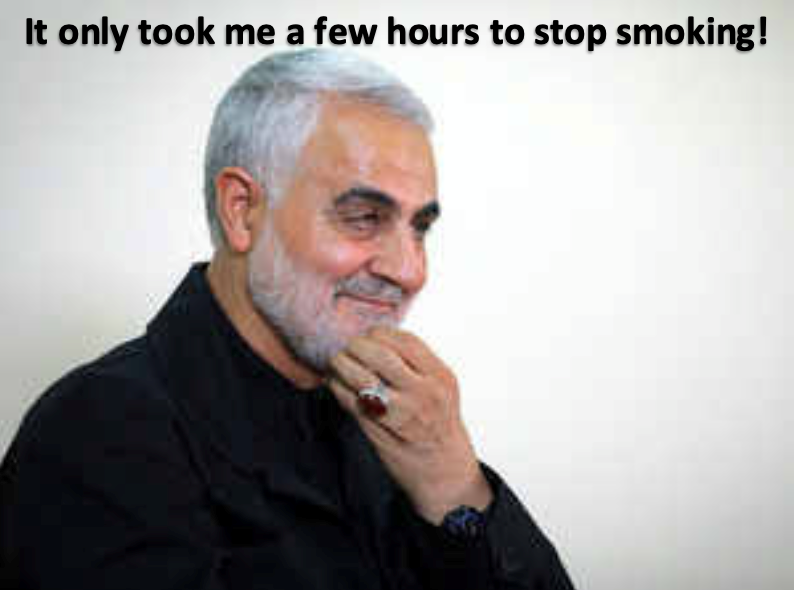 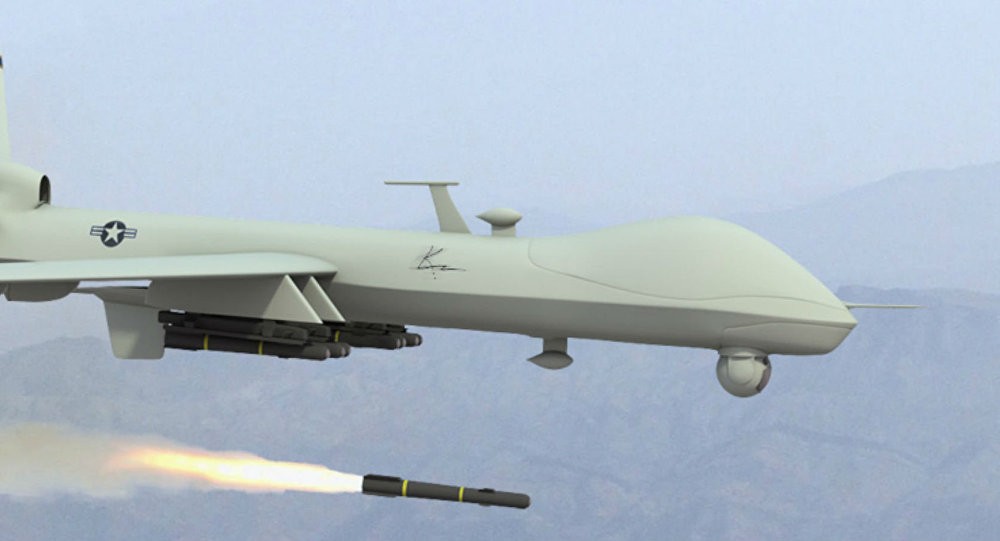 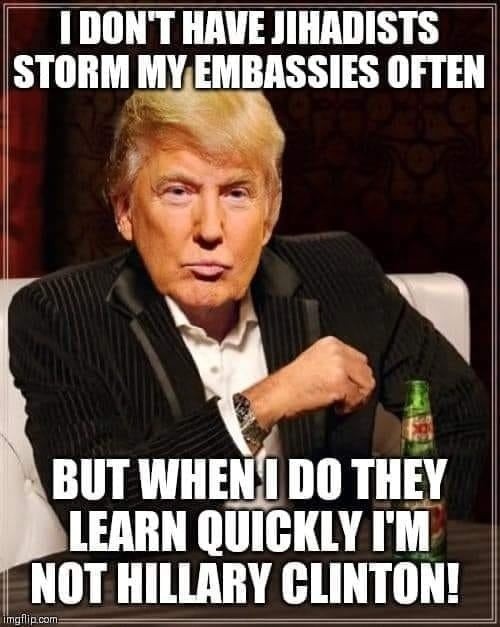 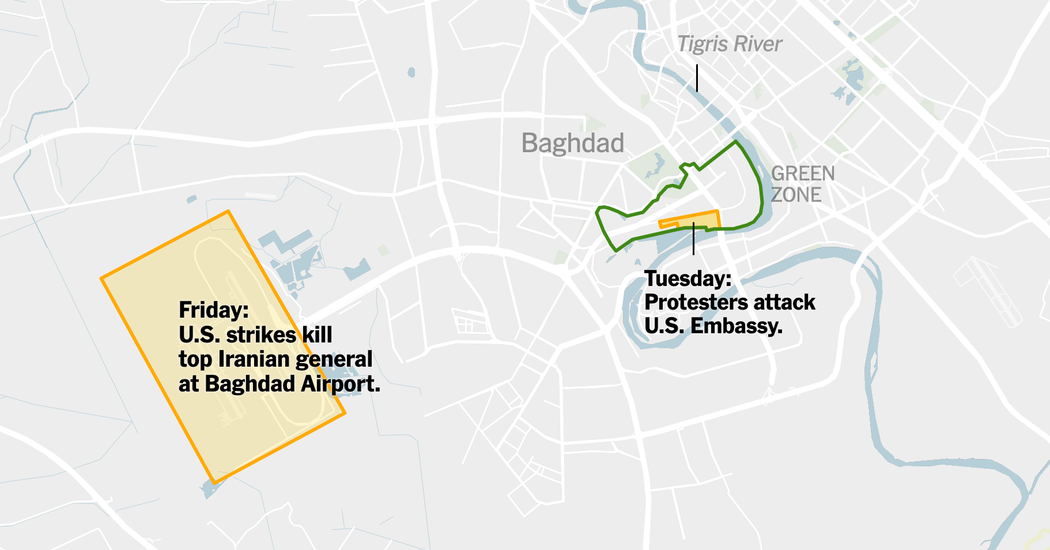 The death of this #Iranian thug was long overdue. And yes, this was very personal to me. After 32 years in the Marine Corps, multiple tours in the Middle East, and specifically two combat tours in the Iraq War, I knew of #Soleimani handiwork firsthand. As a combat engineer, I knew on a daily basis the death toll he exacted against many of my fellow Americans. He was the one who provided Enhanced Penetrator Improvised Explosive Devices to our enemies to be used against our vehicles. We lost over 600 Americans Killed In Action, with many thousands Wounded In Action, with horrible burns and loss of limbs. We knew these devices were coming from Iran, but we were prohibited by our State Department and others from retaliating. I’m thankful that this situation has finally changed under the current administration. I know that most of my Iraq War veteran buddies wholeheartedly agree with me! Robert A. Heinlein said it well: “Pacifism is a shifty doctrine under which a man accepts the benefits of the social group without being willing to pay, and claims a halo for his dishonesty.”

I am thankful that America is finally learning.

For a generation, Iranian Major General Qasem Soleimani bestrode the Middle East spreading terror and death. President Trump’s decision to order the general’s death via drone attack in Baghdad Thursday night is a great boon for the region. It is also belated justice for the hundreds of Americans whom Soleimani had a hand in killing.

One reason the U.S. could track and kill Soleimani near Baghdad International Airport was the impunity he had cultivated. The general often appeared in public, especially in Syria and Iraq, and he sought to build Shiite militias and spread Iranian influence. He was killed with Abu Mahdi al-Mohandes, an Iraqi-Iranian militia leader who met Soleimani at the airport and was outside the U.S. Embassy in Baghdad this week during an assault that Soleimani had approved.

Soleimani arrived in Baghdad with “plans to attack American diplomats and service members,” the Pentagon said in a statement. Mr. Trump’s critics are demanding to see the evidence of such plans. But why does it matter? Soleimani has killed enough Americans over the years to justify the strike as a defensive act to deter other attacks and send a message that killing Americans won’t be tolerated.

That message will reverberate around the Middle East, not least in Iran, where Soleimani reported directly to Supreme Leader Ali Khamenei and was its most powerful military figure. Mr. Khamenei had taunted Mr. Trump with a tweet this week after the assault on the Embassy that “you can’t do anything.” Turns out he could.

Few are more deserving of his fate than Soleimani, who since 1998 had commanded the Quds Force of the Islamic Revolutionary Guard Corps (IRGC).He had a mandate to export Iran’s revolution across the Middle East. The State Department, which labeled the IRGC a foreign terrorist organization last year, says the group was responsible for killing 608 American soldiers (and wounding many thousands) during the Iraq War as it supplied deadly roadside bombs (Enhanced Penetrator IEDs).

American veterans will toast his death, and they’ll be joined by millions in the Middle East. Soleimani abetted genocide in Syria to keep Bashar Assad in power, and he armed Hezbollah in Lebanon with rockets to attack innocent Israelis. Plenty of Iranians also are rejoicing given his role in suppressing popular protests.

Iran is promising retribution, and perhaps it will strike somewhere. But now Iran will have to consider that Mr. Trump will strike back. The U.S. President has shown great restraint – more than we thought he should – in not retaliating after Iran or its proxies shot down an American drone, attacked Saudi oil facilities, and attacked bases in Iraq with U.S. troops 10 times in the last two months.

Mr. Trump finally drew a line at the death of an American and the storming of the Embassy (a very sensitive issue following what had happened in 2012 at the U.S. Consulate in Benghazi, Libya, where the U.S. Ambassador was killed). Perhaps he heard echoes of Barack Obama’s failure in Benghazi. Whatever Mr. Trump’s calculation, Mr. Khamenei now has to consider that even targets inside Iran are not safe.

The death of Soleimani should also reassure U.S. allies spooked by Barack Obama’s many capitulations and Mr. Trump’s partial withdrawal from Syria last year. This assumes Mr. Trump will be resolute if Iran escalates and doesn’t withdraw remaining U.S. forces from Iraq or Syria.

Iraq’s caretaker Prime Minister, Adel Abdul-Mahdi, condemned the Soleimani strike, but he hasn’t spoken for his countrymen since promising to resign in November amid popular unrest. Iranian-backed forces helped slaughter hundreds of Iraqi protesters, and many Iraqis took to the streets to celebrate Soleimani’s death. The Iraqi Parliament still may vote to push U.S. troops out of the country, but it would be mistake. The U.S. goal in Iraq is to help ensure Iraqi independence from a revival of Islamic State and Iranian meddling.

The least credible criticism is coming from American Democrats, especially those who worked for the Obama Administration. Their policy was to appease Tehran with a nuclear deal that would supposedly induce its leaders to join the civilized world. Instead the deals cash windfall empowered Soleimani to export revolution.

Now they’re fretting that responding to Soleimani’s mayhem is too risky. Joe Biden said Thursday Soleimani “supported terror and sowed chaos,” but that doesn’t negate “the fact that this is a hugely escalatory move in an already dangerous region.” In other words, Soleimani was a deadly menace, but the U.S. should have done nothing about his depredations because Iran could hit back. That is appeasement, not leadership.

Earlier this week Connecticut Senator Chris Murphy tweeted that “Trump has rendered America impotent in the Middle East” and “no one fears us.” But now he is upset that Iran might retaliate and Mr. Trump struck “without any congressional authorization.” In our view Mr. Trump had the power to act as Commander in Chief. But Mr. Murphy’s logical whiplash shows that loathing for Mr. Trump has so blinded Democrats that they can’t even praise the demise of a murderous enemy.

In brief but useful remarks Friday, Mr. Trump said he ordered the drone strike “to stop a war,” not to start one. That should help to calm down those on the isolationist right threatening that any military action means a ground war in Iran. As Ronald Reagan showed with his 1986 bombing of Libya, a show of force can deter terrorism against Americans. Soleimani’s demise may even make an impression on North Korea’s Kim Jong Un.

The U.S. challenge from a revolutionary Iran will continue. But Mr. Trump’s decisive action has struck a blow against terror in the cause of justice and American interests.

Winston Churchill once said: “A pacifist is someone who feeds the alligator, hoping it will eat him last.”

America must understand that in all our history, we never got into a war because we were too strong, but in almost every case because we were too weak, or perceived to be too weak or hesitant. In the Middle East, the perception of being weak, hesitant, or naive can be fatal. Our Israeli friends have been trying to tell us this for decades.

As Americans, we have to resolutely do the right thing. We must remember our heritage as “the land of the free and the home of the brave.”