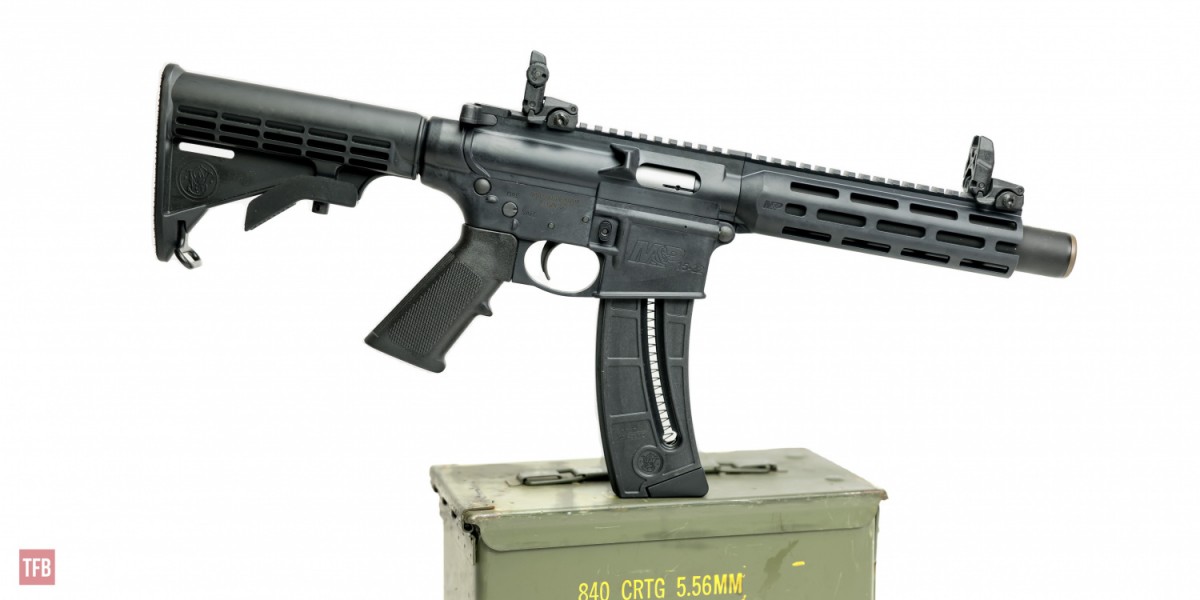 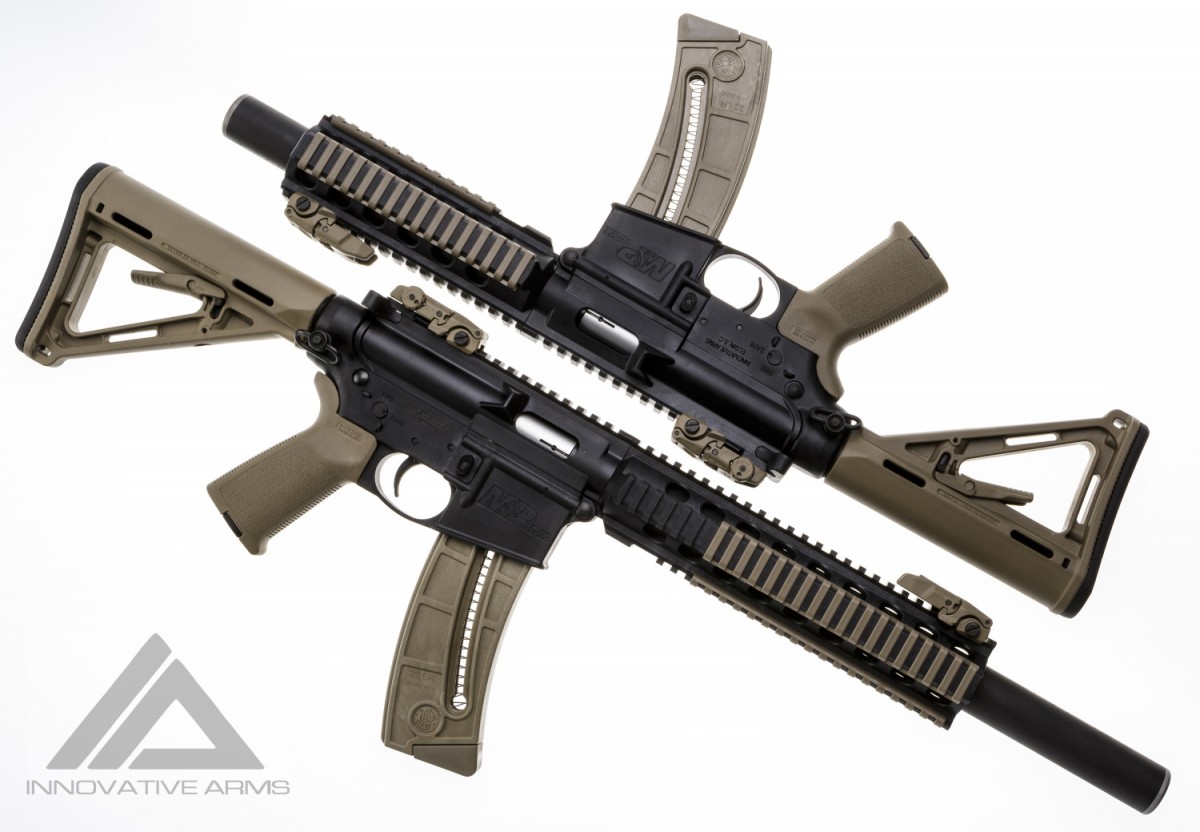 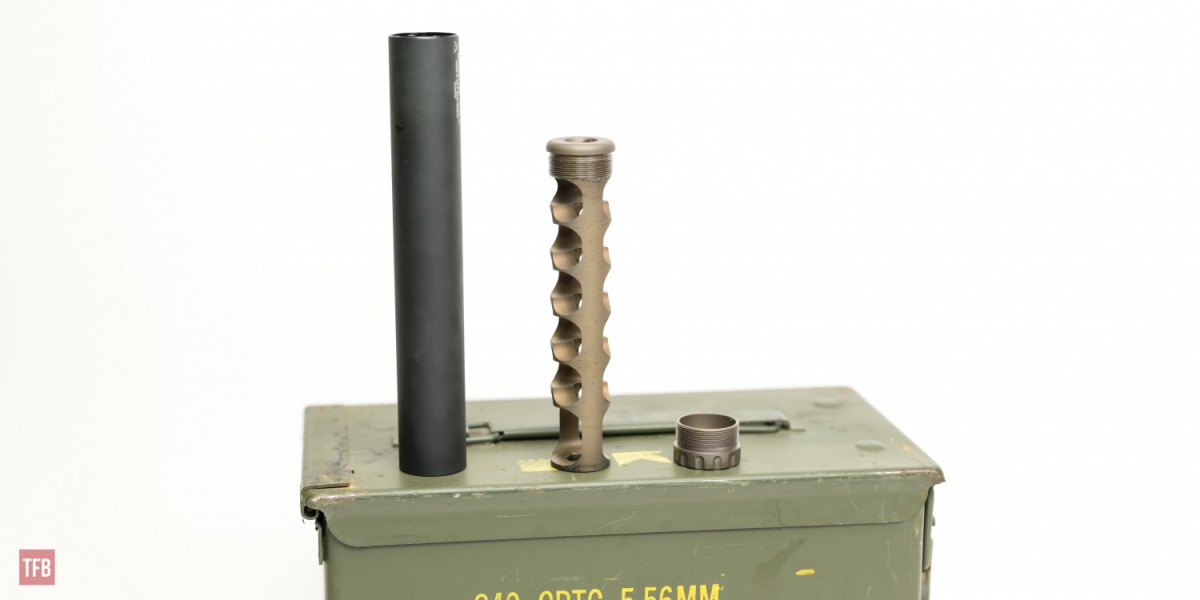 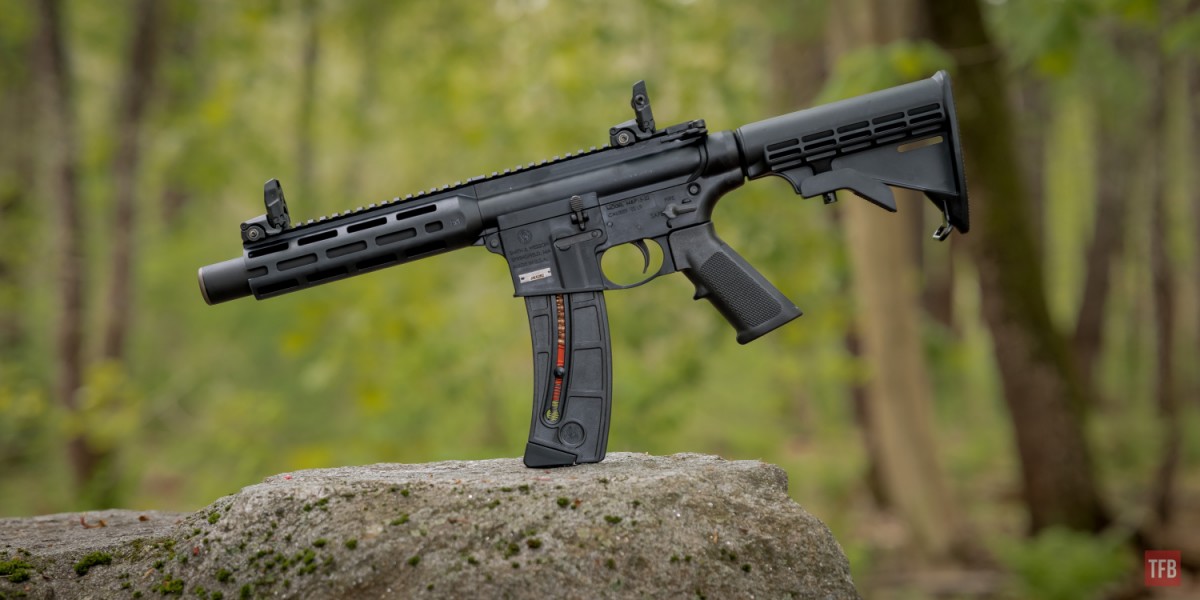 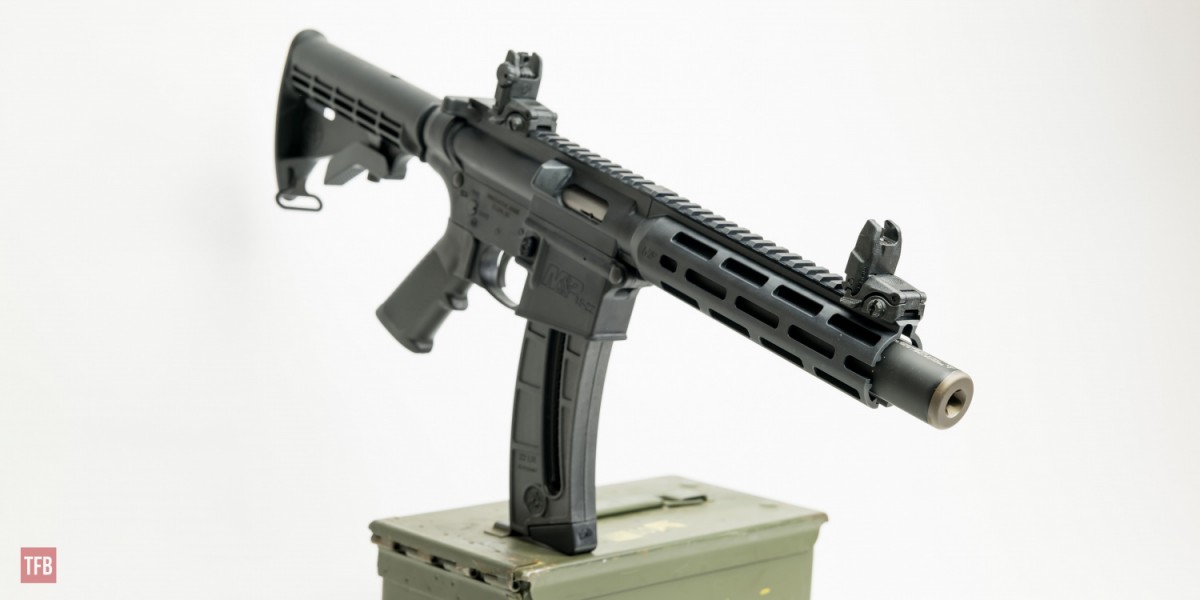 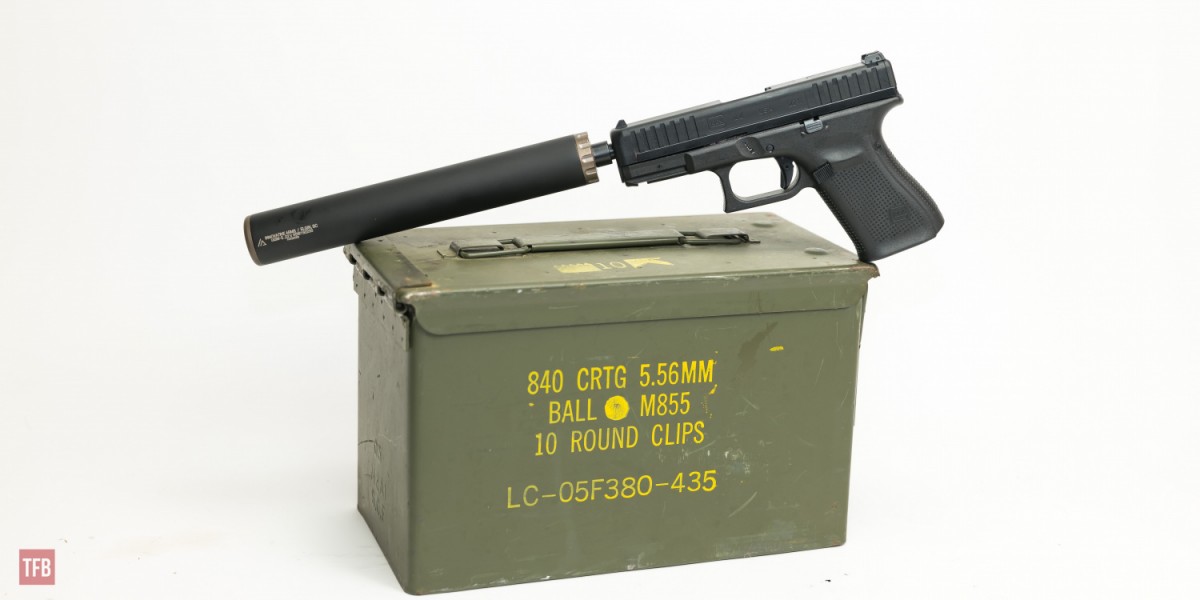 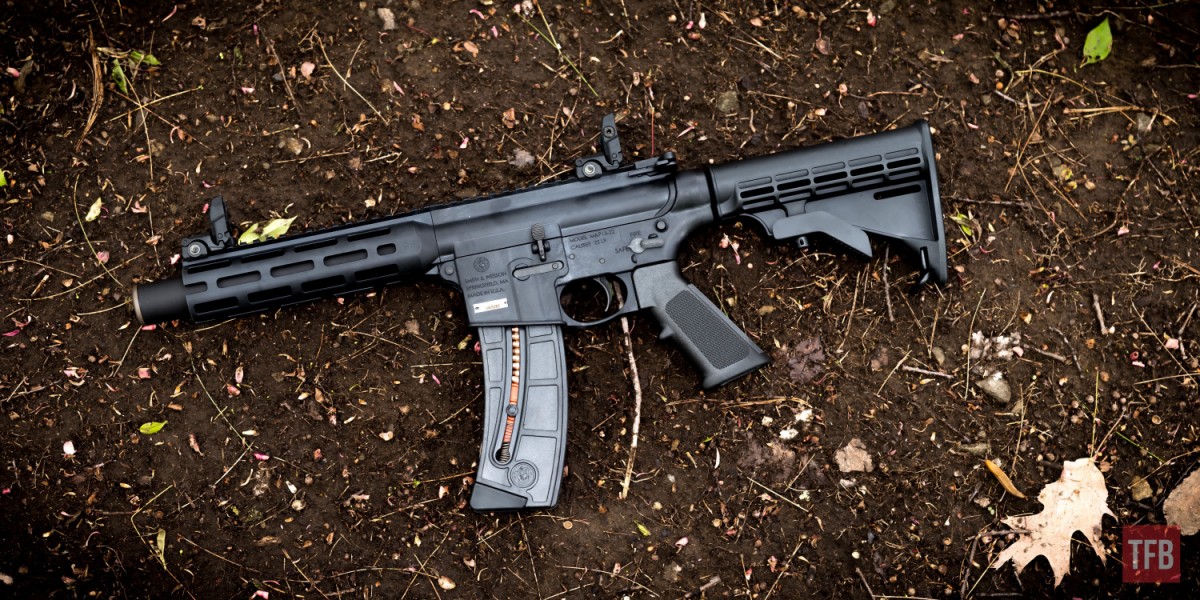 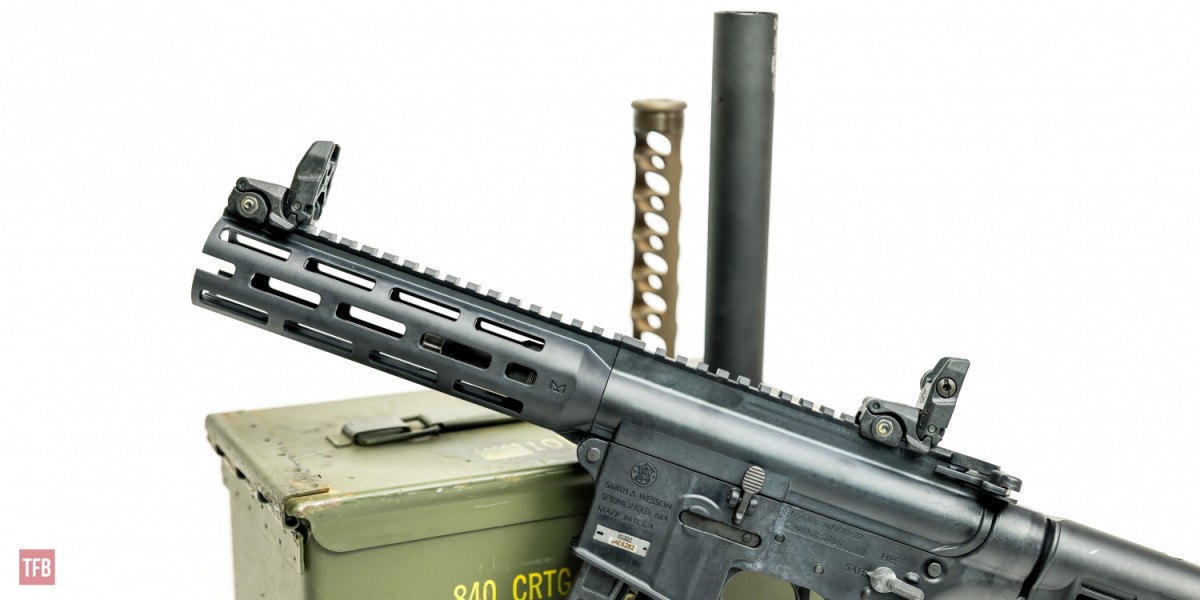 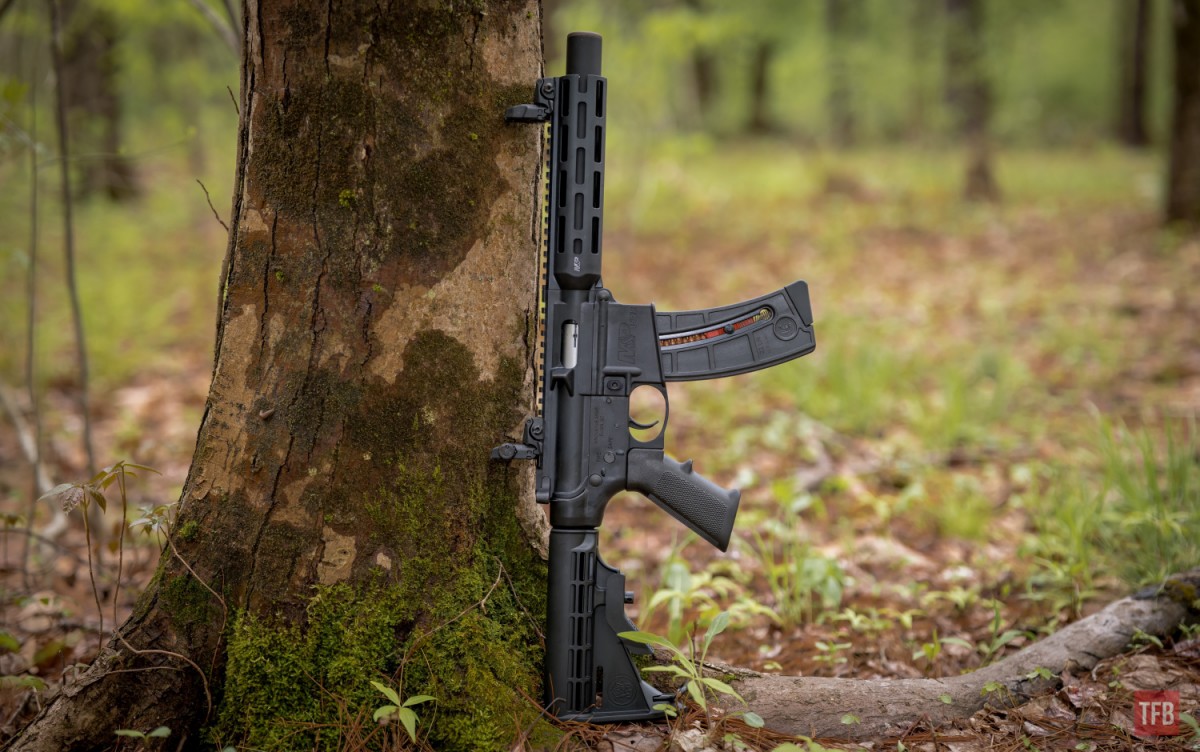 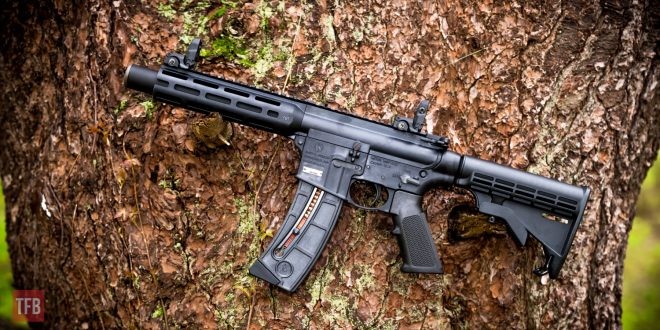 Today we take a look at the IASW Suppressed 22LR AR-15 from Innovative Arms. Small, light, inexpensive to shoot and very quiet, the IASW is a very quietly to practice skills or just backyard plink without alerting the neighbors. Heck, you wont even alert the guy standing next to you. Is it worth spending around $1,000 of your hard earned cash for a suppressed rimfire AR? Let’s take a look.

I have gone years resisting the urge to own an AR-15 chambered in .22LR. And honestly I feel like a hypocrite; I’ve preached the blessings of suppressed rimfire shooting for years and rarely have I ever mentioned owning an AR chambered in the only cartridge that is guaranteed to bring a smile to everyone’s face. Purpose-built .22LR AR-15’s can feel like toys in comparison to their full-powered cousins, but that no reason to shrug them off as a firearm not worth your time. Until now, I have failed you by not highlighting a platform that is a joy to shoot, inexpensive and quiet.

The Innovative Arms IASW is available in two versions: a two stamp short barreled rifle and a 16.1″ rifle with a permanently attached suppressor tube and handguard. The IASW is built from a Smith & Wesson M&P15-22 base rifle with a barrel cut down to 4.5″. This barrel length is the magic number to keep most .22LR ammunition in subsonic velocities to achieve the maximum amount of noise reduction.

Although Innovative Arms calls the IASW an integrally suppressed firearm, purists will disagree since there is no porting of the barrel. I’d argue that since neither the NFA or non-NFA versions can be shot without their included suppressors, they are at least pseudo-integrally suppressed guns. I doubt that will turn off many potential customers.

With a base MSRP of about $500 for the S&W M&P15-22 and a quality rimfire silencer running about $350, the argument can be made that you can build a suppressed 22LR AR15 cheaper than buying a complete “integral” system. However, as is the case for suppressing most calibers, internal volume is king. And, depending on the model your chose, the Innovative Arms IASW has double or triple the volume of standard rimfire suppressors. The results are noticeable.

An added benefit to those who decide to go with the two stamp SBR and suppressor combo is the included 1/2×28 mount adapter that allows for the IASW can to be used on other rifle and pistol hosts. Again, since the 16.1″ model has a permanently attached suppressor tube, it is locked into one configuration for life.

Which brings up a good point: why doesn’t Innovative Arms offer a pistol version? If you flip open your trusty NFA guidebook (j/k there isn’t one) you’ll remember that U.S. firearms laws state that if a firearm begins its life as a rifle, it will always be considered a rifle, even if you swap out the stock for a brace. And since S&W doesn’t currently offer a pistol version of the M&P15-22, Innovative Arms is stuck building rifles in either NFA or non-NFA flavors. Note: The M&P15-22P pistol is unfortunately no longer in production.

So why not just buy or build a 10/22 or another semiautomatic rimfire rifle or pistol? For one, an AR-style rifle allows your to build skills and train with all the ergonomics and muscle memory of an actual AR-15. Without the recoil, noise levels and intimidation that can come with all of those evil black rifles. New, younger and slight-statured shooters can shoot the IASW for hours without the need for hearing protection or dealing with recoil. Repetition is the key to becoming a competent shooter. Obviously there are conversion kits that will allow you to build a rimfire AR-15 on an existing 5.56mm lower.

Back to the price. Yes, $1,100 to $1,300 is a lot of money to drop on a rimfire rifle. But if you consider the complete package it may be worth the extra investment to have a factory suppressed system.

As with most monocore silencers, the IASW is prone to a slight amount of first round pop (FRP). But I’d characterize the FRP as being barely noticeable under normal conditions.

The suppression levels of the IASW are excellent, ranked up their with the best thread-on rimfire suppressors on the market today. However, since I don’t own a short barreled semiautomatic rifle, my comparisons are relegated to pistol hosts. If you are looking for extreme quiet, you won’t be disappointed.

Available in a standard 16.25″ overall barrel/silencer length, or as an SBR. The SBR version is a two tax stamp firearm. This integral features a one piece billet core that is machined from 17-4ph stainless steel and are user serviceable. Each integral comes with a tool, however, you can also use any standard 3/8 drive wrench. No need to buy subsonic ammo to be stealth quiet, our unique design gives you subsonic velocities with standard and high velocity ammunition. Firearm model ,color, and furniture may vary. Specify with your dealer before ordering. Please be aware that the tube and handguard on the 16.25″ standard length 15-22 integral is permanently pinned and not removable.

While the initial investment for the Innovative Arms IASW is slightly higher than buying a standard rimfire AR platform and thread-on suppressor separately, the performance and size of this system is worth a hard look. Pulling the trigger on the IASW is a giggly-worthy experience. Suppressed rimfire is life. 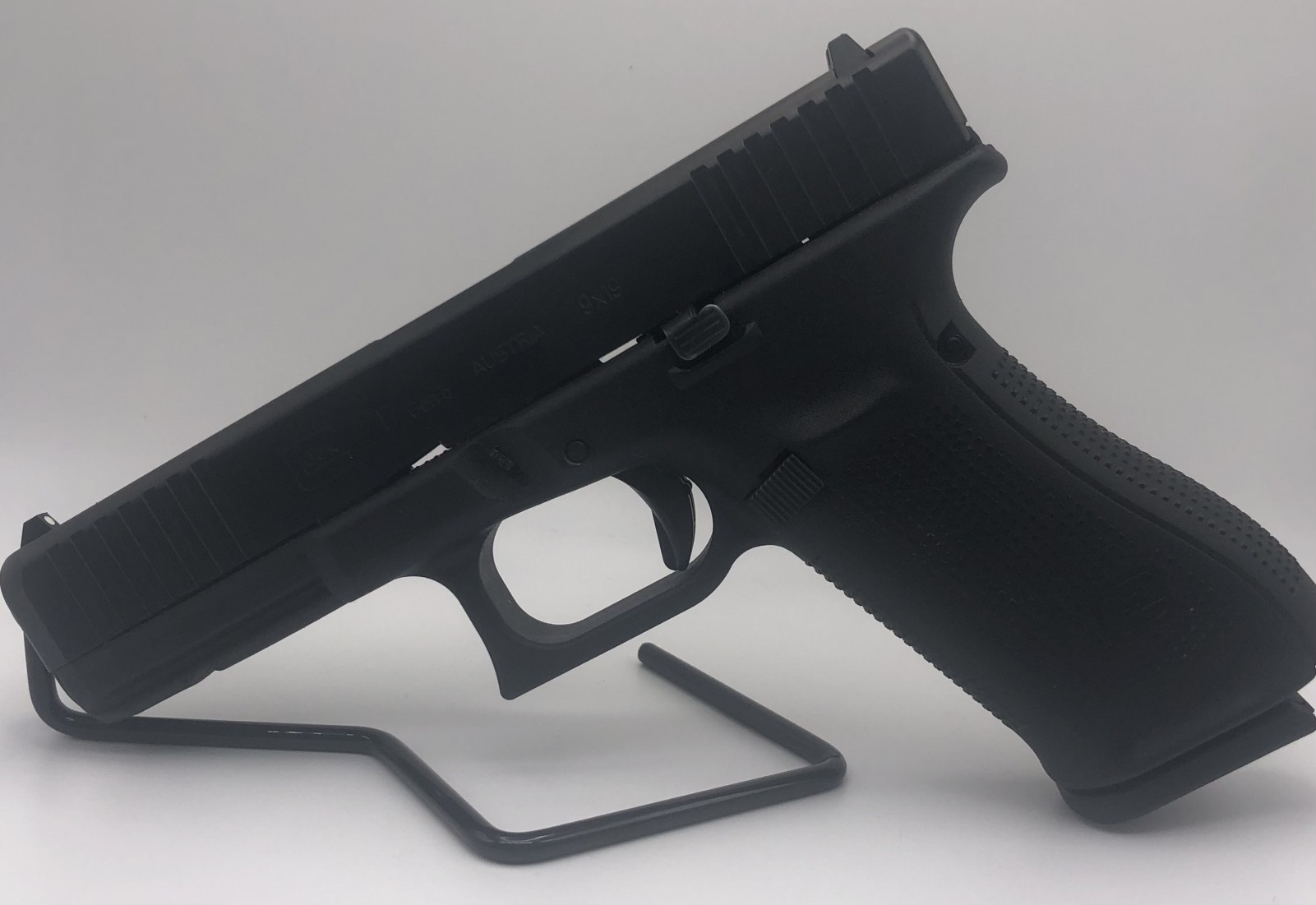 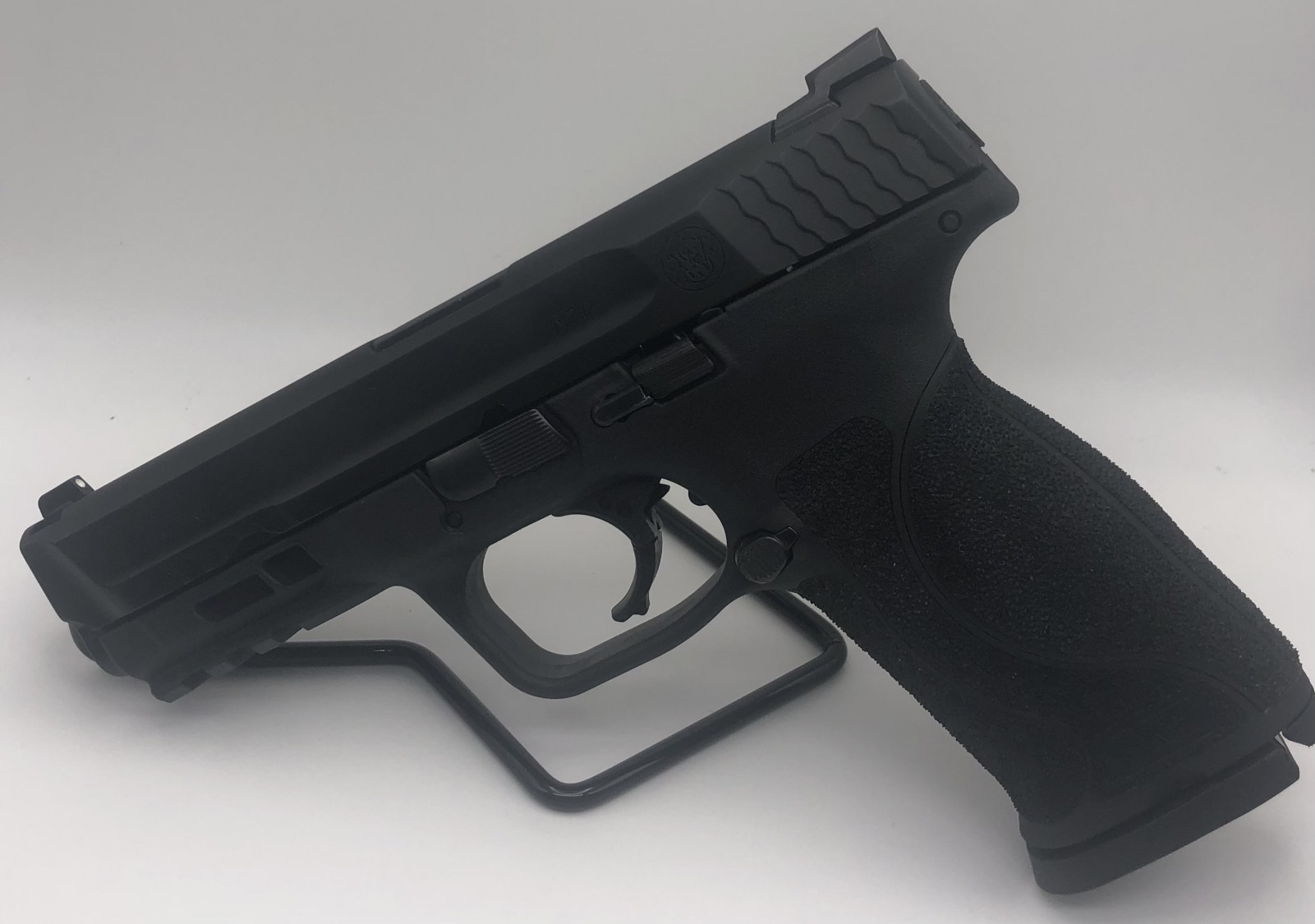 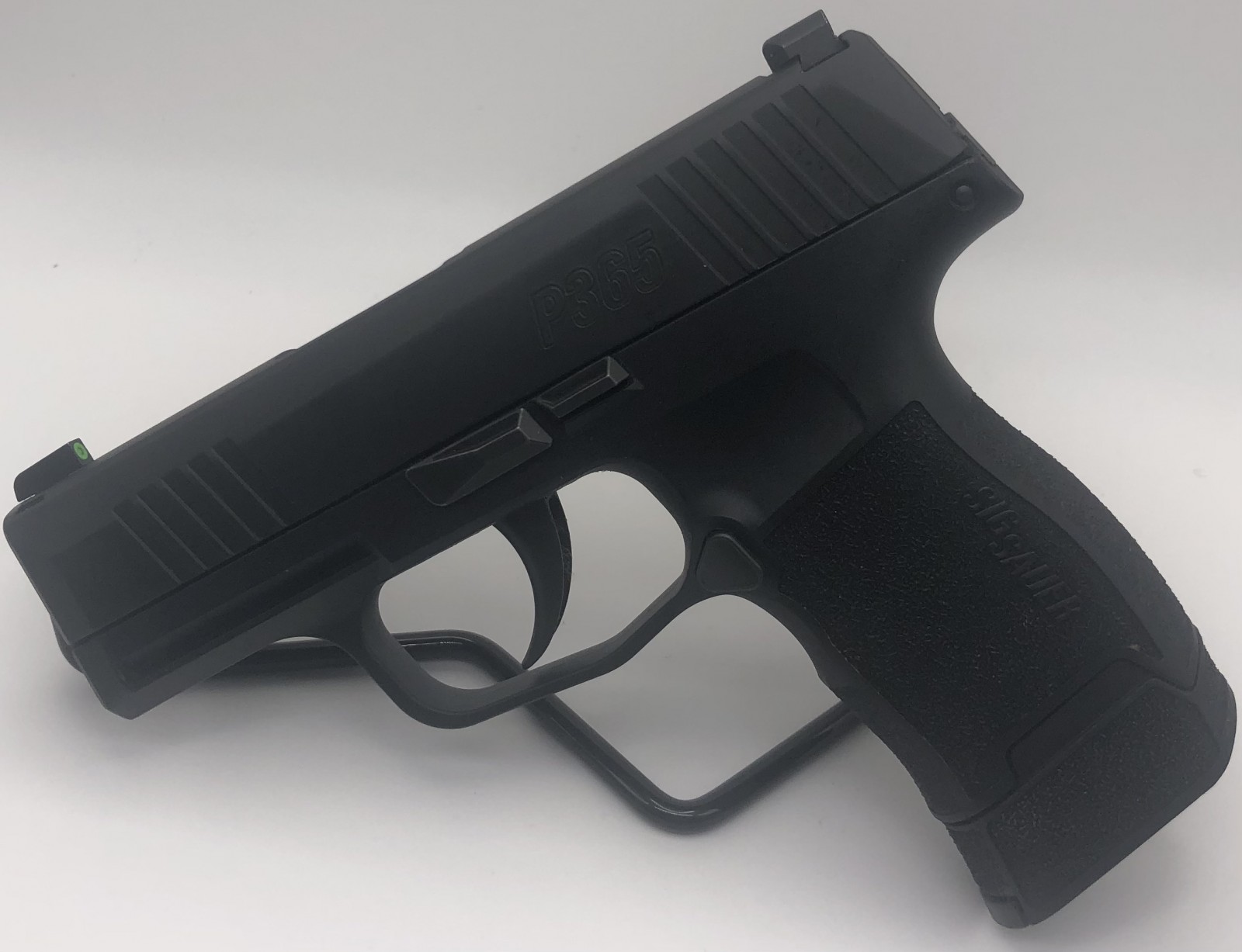 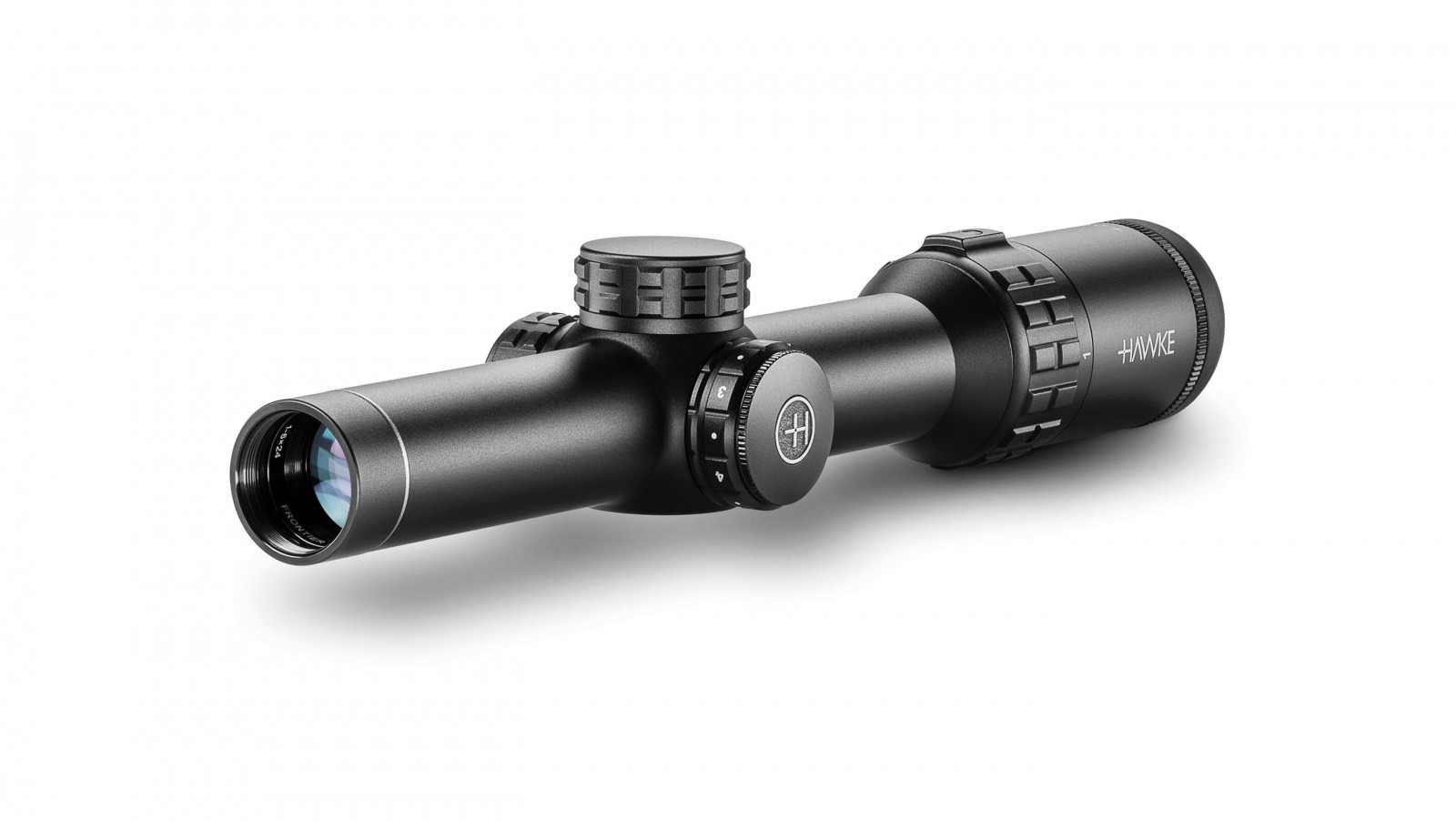